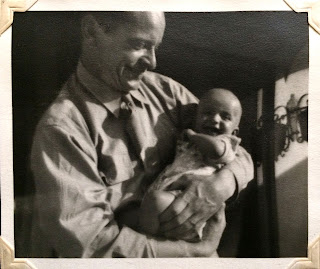 Maurice in 1944 with his oldest daughter Patty 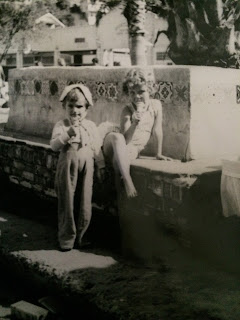 Noble Motivation: Patty and Pam
While serving during WWII Maurice's wife left him, and took off with their two daughters. For years his only real connection with his children was through his cartoons at Warner Bros. He told me he KNEW his girls would see the cartoons... and he worked his tail off to make them special. Maurice often worked on the cartoons late, and over vacations and weekends. They were love letters to his children. His attempt at being a small part of their life somehow. 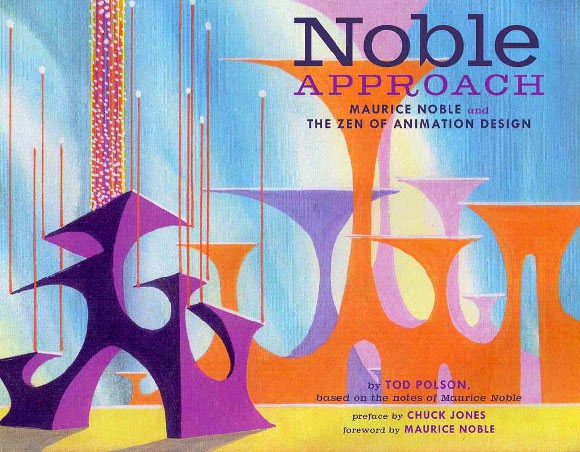 As the first anniversary of The Noble Approach: Maurice Noble and the Zen of Animation Design draws near... great reviews are still coming in for the book! This time from Patrick A. Reed of Comics Alliance.

Maurice Noble had a unique way of using reference. Rather than drawing directly from source material for a particular design, Maurice would pull inspiration from what he called his "Visual Memory." This "Visual Memory" was a store of visual images in his brain that he had built over time through travel, viewing art, and other experiences that would make an impression on him.  Later... sometimes years or decades later... he would redraw his impression of a place from memory for a design... using its strongest characteristics.

Here are a few Maurice design examples, and their original inspiration: 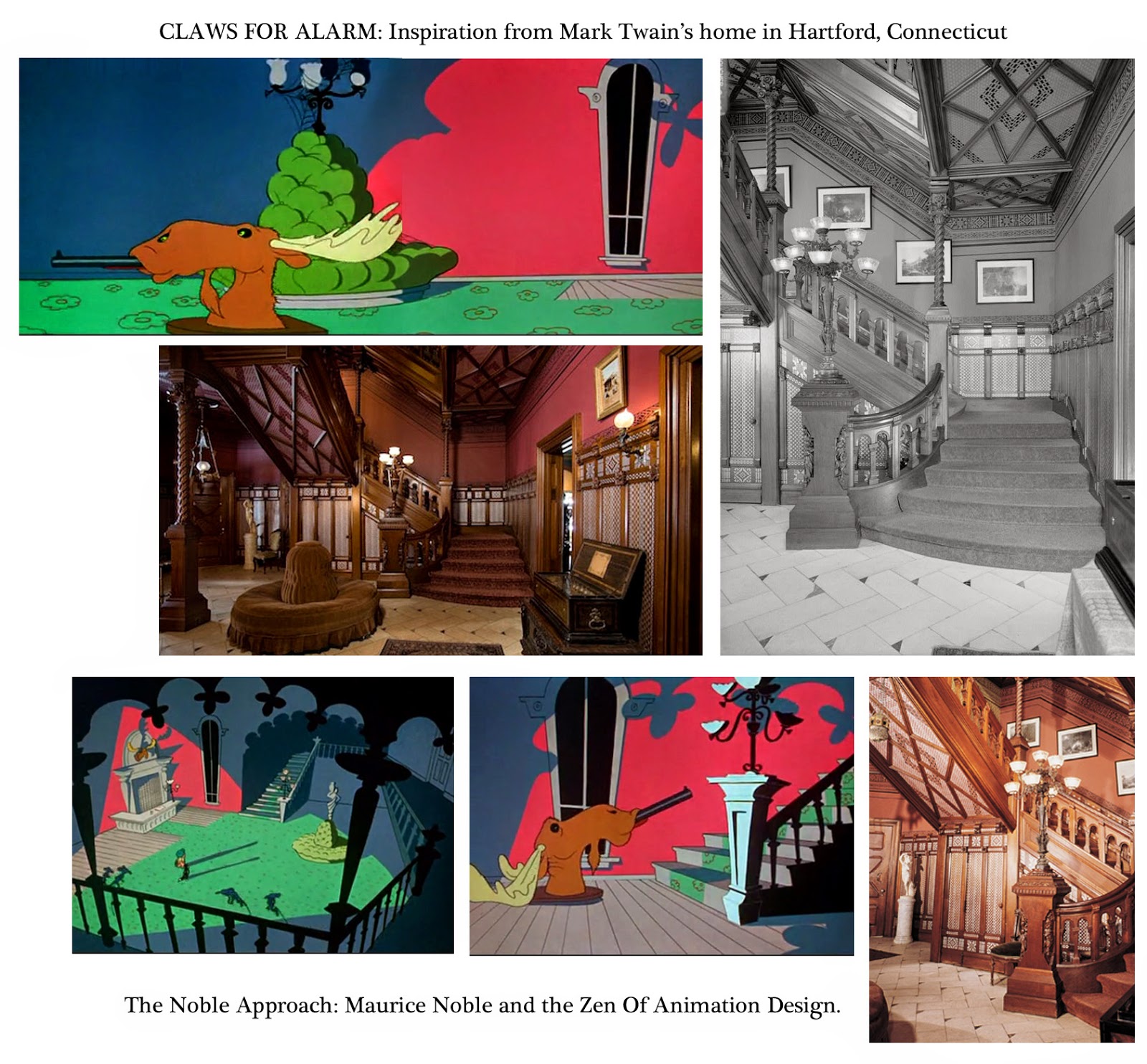 "Claws For Alarm" and Mark Twain.

It is well known that Chuck Jones was a huge fan of American author Mark Twain. What is less known is that Mr. Twain found his way into a number of Chuck's cartoons. Here Maurice gives us a "poor man's" version of the grand hall from Twain's 19 room Connecticut mansion in "Claws For Alarm." (1954) 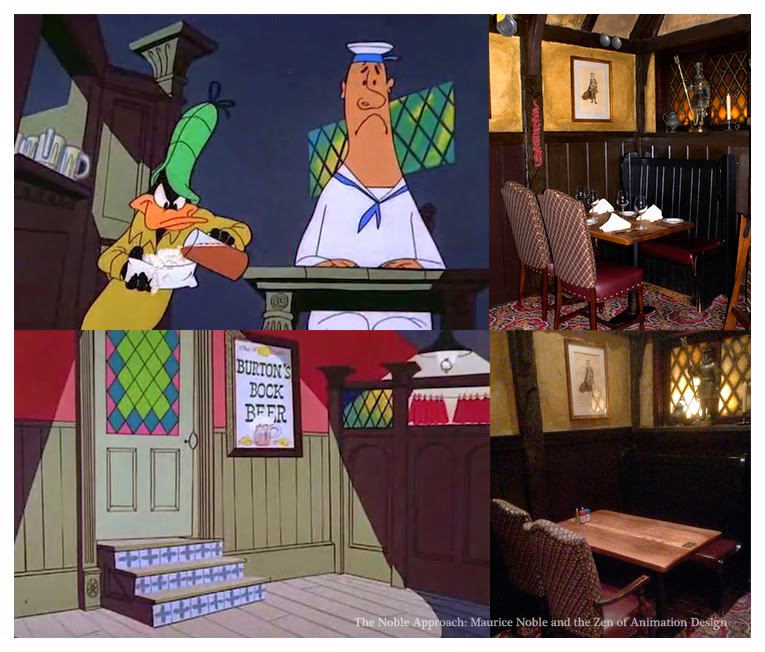 "Deduce You Say" and the Tam O'Shanter.

Maurice often drew design inspiration from life experience. His assignment for "Deduce You Say" (1956) was designing old world London. But since he had never been to Europe, he referenced the second best thing... The Tam O'Shanter restaurant on Los Feliz Blvd. Pictured here is Walt Disney's favorite table. 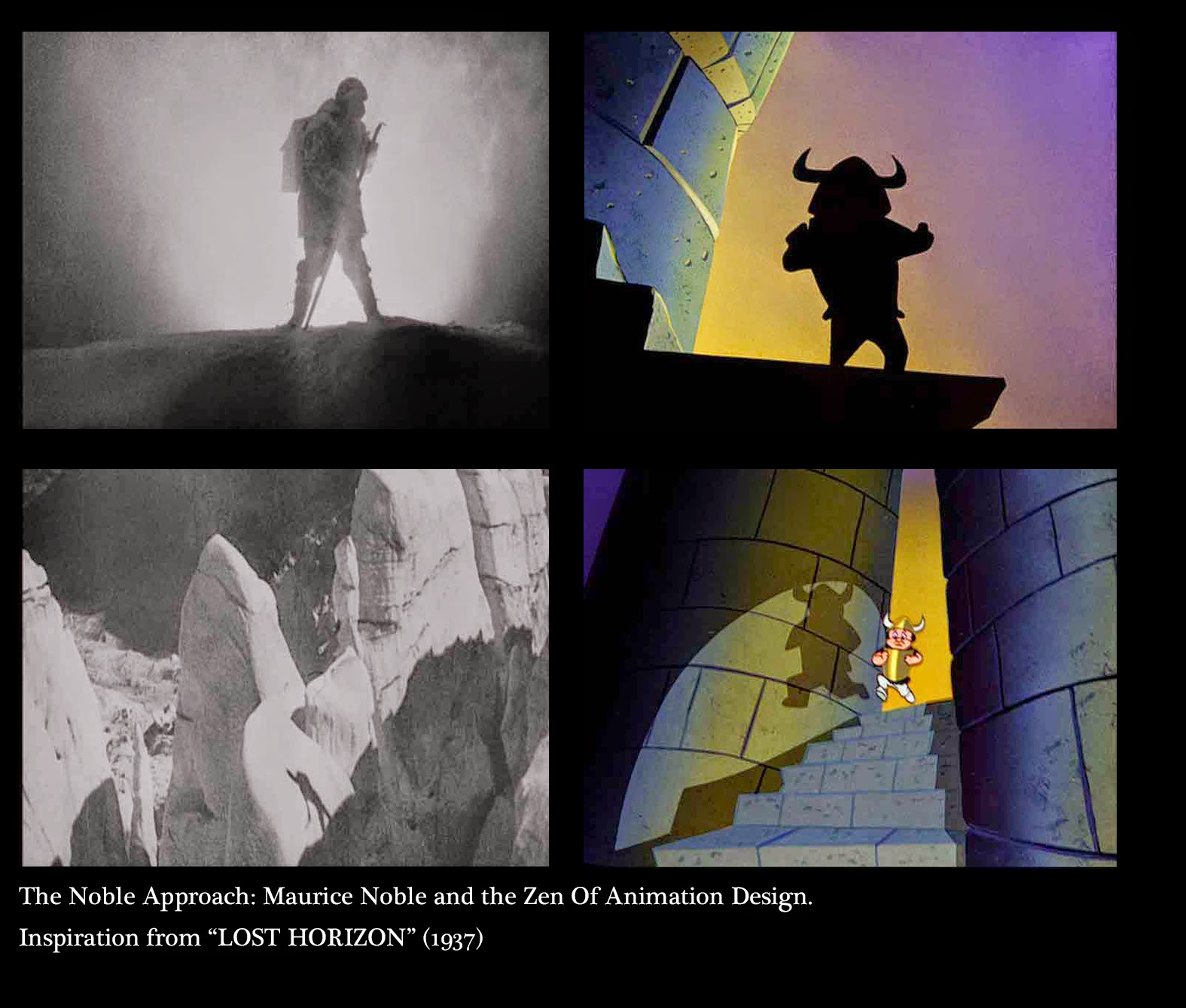 Frank Capra's movie "Lost Horizon" was one of Maurice's favorites. From it he drew inspiration for bits of "How The Grinch Stole Christmas," "What's Opera, Doc?" and many other films. This is a great example of Maurice's use of visual memory. He couldn't look at still frames of the movie, but he had seen "Lost Horizon" enough times that certain scenes made a distinct impression on him. Finding their way into his work.


Supplement to pg. 77 of The Noble Approach: Maurice Noble and the Zen of Animation Design.
Posted by Tod at 8:11 PM No comments: 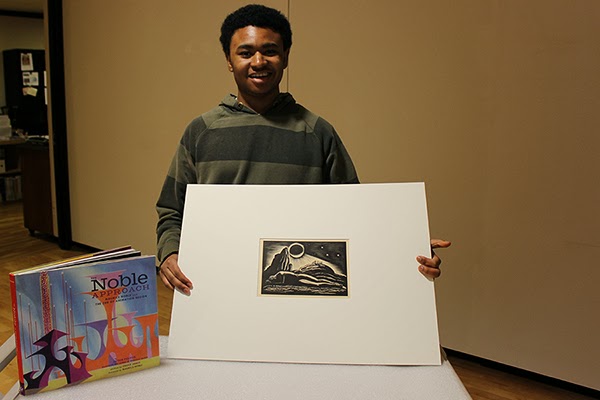 Above: Khari Saffo ’15 with “The Noble Approach” and Rockwell Kent’s “Twilight of Man.”

The folks at Denison Museum of Granville OH were a huge help in putting "The Noble Approach" together. They kindly allowed me to include Rockwell Kent prints from their collection in the book. Khari Saffo of Denison has written a lovely article about the experience which can be found HERE! Originally I had intended on including more Kent images, but unfortunately because of space issues I was only able to include one.

Rockwell Kent was one of the most famous American print-makers of the early 20th century. Kent's use of light and dark pattern, and the way he stacked values had a huge influence on a young Maurice. Years later, while training at Chuck Jones Film Productions, Maurice taught us that... "good use of light and dark is the first important step in learning to use color." He cited Rockwell Kent as a great example of how to use value. 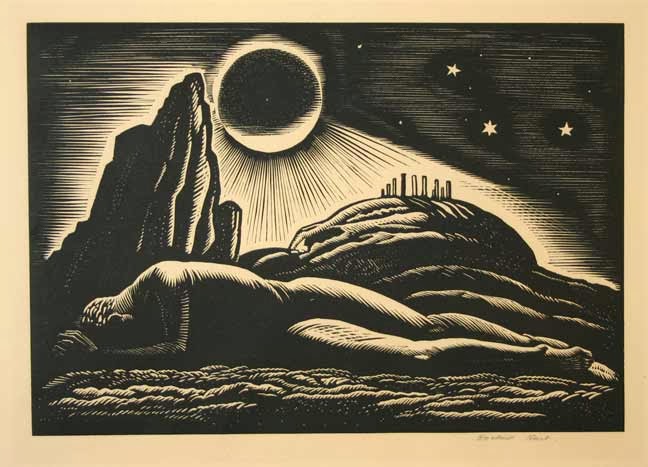 Many have asked... "What exactly does stacking value mean?" In simple terms, it describes the method of putting an element in a picture against something darker or lighter than itself so that it "reads" easily. In these Kent examples, every single element in his picture can be seen clearly in spite of using a limited value range. 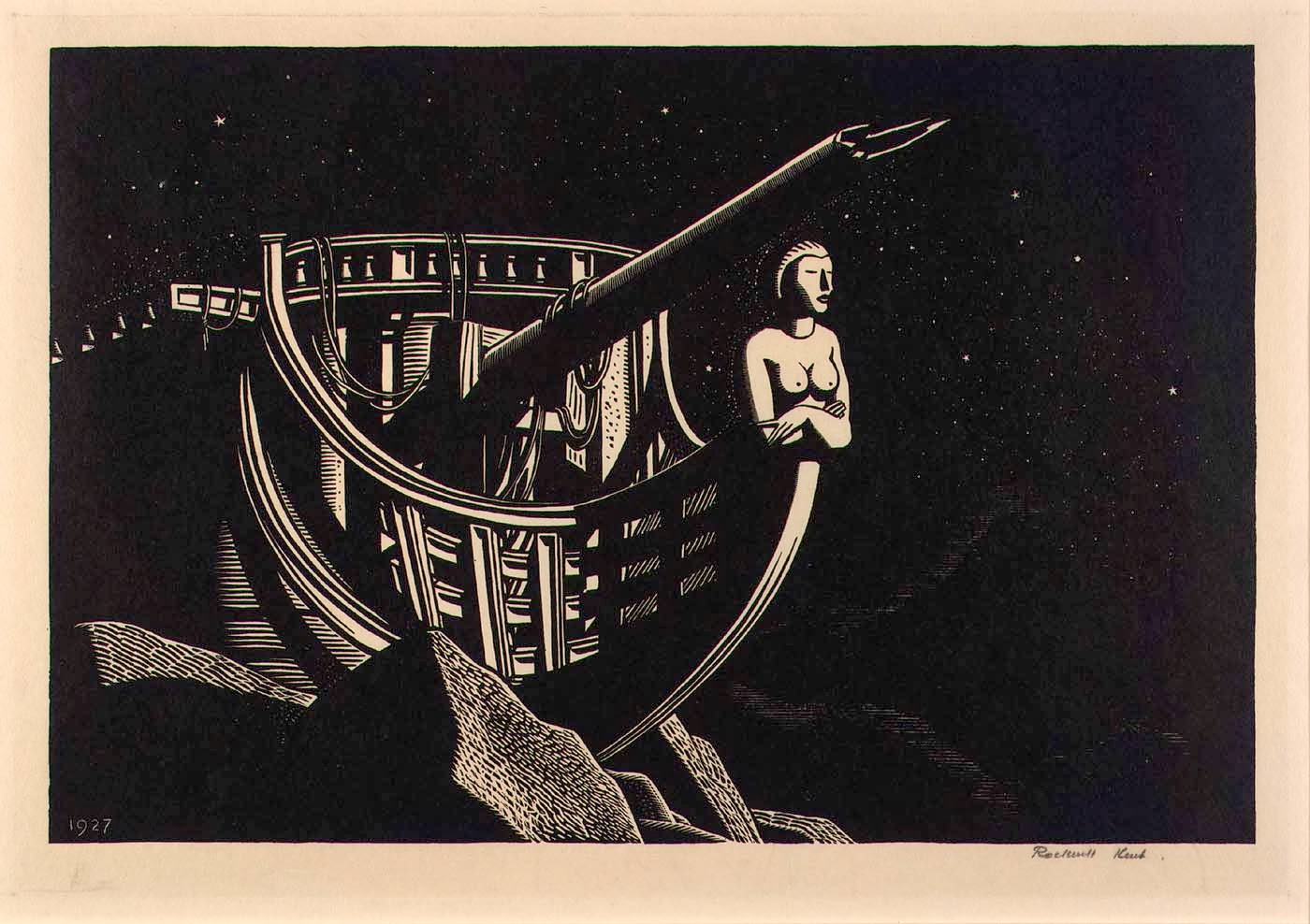 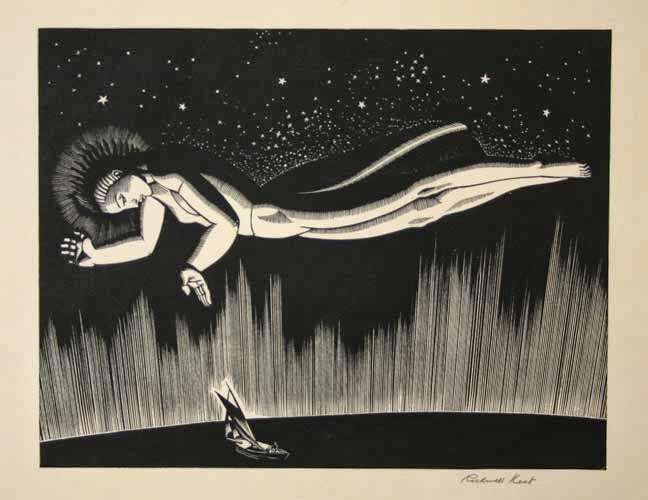 To see more... please check out page 91 of The Noble Approach.


Above: A quick tour of The McKean Hospital via scooter.

Chiang Mai was always a special place to Maurice. In 1908, Maurice's uncle, missionary Dr. James McKean, and Pauliang (Guardian Father) Chantah Indravude set up a leper colony after asking the King of Thailand for a parcel of land. The McKean Hospital still exists there today. Gifts from Dr. McKean, such as Thai and Indonesian batiks, made a huge impression on young Maurice, who in turn created his own batiks at home. For the rest of his life he would foster a love of Asian arts and crafts. Maurice's uncle had such a strong influence that for a time Maurice considered becoming a missionary. In later life Maurice had serious plans to build an animation studio in Thailand. Our first project was to be "The Pumpkin of Nyefar," but Maurice passed on before we could start production.

Originally "The Noble Approach" was to be published in the spring of 2012. To celebrate we arranged a five day workshop in Chiang Mai based on a few of Maurice's basic teachings. Because of circumstances beyond our control the book wasn't published until late 2013. Now that the book is out we are planning more "Noble Approach" workshops in the very near future.

Maurice never gave much praise to many non-Disney, non-Warner's cartoons. But one of his favorites was the 1961 Oscar winner "Surogat" by Dusan Vukotic. Maurice felt that the film was a great example of what the animated medium is best at; "graphic imagination."  It's not too far of a stretch to see how this film could have helped influence Maurice's own Oscar winning effort, "The Dot and the Line." (1965)
Posted by Tod at 7:30 PM No comments:

How The Grinch Stole Christmas: A Christmas Classic 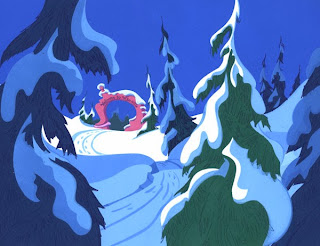 In 1966 M.G.M. released what would become a Christmas classic, "How The Grinch Stole Christmas." The TV special was directed by Chuck Jones, based on the book of the same name by Dr. Seuss (Ted Geisel.) Maurice art directed the short, taking inspiration from Seuss's book illustrations, adding to them his own Noble twist.

On the Looney Tune's shorts of  the 1950's Maurice had painted numerous design keys in cel vinyl for the background painter to follow. Many of these keys were in essence small versions of the final backgrounds. By the 1960's Maurice began making small marker sketches directly over his rough pencils. Magic Markers weren't in common use until the late 1950's and they were simply faster than paint. The more staging ideas Maurice could get through... the stronger his final compositions would be. 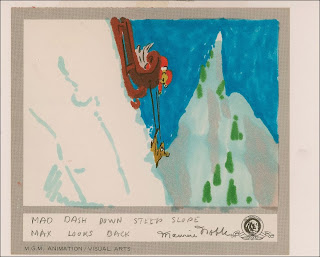 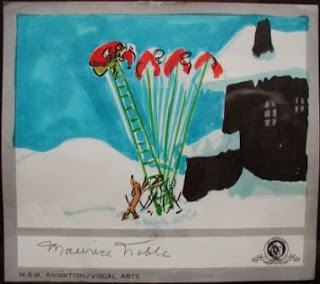 Maurice's duties went far beyond simply designing the films he worked on. Early in the film making process he would often give numerous staging, story, and gag ideas. Most of these ideas didn't make it into the final film, but many did, and the influence he had on the staging and feel of "The Grinch" is undeniable. The back and forth story process that Maurice and Chuck Jones used is described on Pg. 56 of "The Noble Approach."

"The Grinch" was one of Maurice's favorite films from the period. But for many years Ted Geisel never expressed how he felt about the film. In 1991, during Geisel's memorial service, Geisel's doctor relayed the following message to Maurice: "Ted wanted mee to tell you how much he loved Grinch, especially your work on it." Amused, Maurice later told me, "This was typical of Ted, always getting in the last word."